I have the pleasure working with Author's Taproom for the release of my first Sci-Fi Paranormal Romance!

Stay tuned for news about a TOUR WIDE Giveaway!

Defy The EYE: The Zarbizokian Outsider

New author Layla Lochran transports her readers back in time with her very first Sci-Fi romance novel filled with Viking folklore, heart racing conflict, and newfound love sure to win your heart. 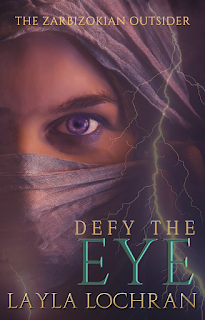 Astradell is the first female of the Zarbizokian’s to become a ‘Defender of the EYE’; an organization of elite beings who protect their planet and search for an unknown threatening force. Mission 1: Gain information from planet Earth. Allowing temptation to rule, she soon disobeys the first rule of the EYE; never interact. Mission 2: Even when placed lightyears away, a bond formed between her and the man in furs from her visions. She knows he is here on Earth; she needs to find him before it is too late. Mission 3: Fight off her Defender brethren.

Gundar’s ancestors hid themselves in the icy tundra on Earth long ago, telling tales to each generation, worshiping many Gods and other worlds of beyond. Folklore or not, he knows there are many secrets buried within their kind yet to be discovered. Plagued with a gift to hear other’s thoughts, he distances himself in hopes of gaining solace. Strength waning, he finds it difficult to go on, until a beauty baring wings and glowing eyes fills his days. His Goddess, ready to take him to Valhalla.

Astradell knows she is the key in saving her people of Zarbizoka, but first she must defend Earth from a mysterious threat that is transforming humans into beasts.

Get a first look into the new Ambrotos Defenders Series at the end of this story!

Paperback- On day of Release

IT'S HERE! Now Available: BATTLE BORN FOR YOU book #2 in the Tell All Secrets series

BATTLE BORN FOR YOU is available now on Amazon Kindle and FREE on Kindle Unlimited! Grab your copy today! ABOUT THE B...